When we were looking at flights home for Thanksgiving we kept getting the option of a layover in our normal flight route through Dallas or through Tokyo.  Since we hadn’t had a chance to visit Japan we decided to take advantage and turn our layover into a 24 hour stopover.

We took off after work on Tuesday from Hong Kong which meant a late landing in Toyko, knowing this we flew into the Haneda airport so we had a shorter drive to our hotel.  After checking in quickly, we immediately head towards downtown Tokyo to check out the “weird-ness” we had heard so much about.  We didn’t have much of an agenda or too much information about where to go so we just had our taxi driver drop us off somewhere near the Robot Restaurant which is in the heart of one of Japans so called “Red-Light Districts”.

Unfortunately we arrived to late fo the show so decided to just roam around what we leanred was the Shinjuku neighborhood to take it all in.  We had found out that one of friends/Hong Kong tour guides, Ruby, was also in town for work a near us.  We kept trying to find her but were unsuccessful in doing so because her phone died.  At this point we were a little hungry so found a little restaurant to try some skewers (essentially different meat or vegetables on a stick grilled or deep fried). 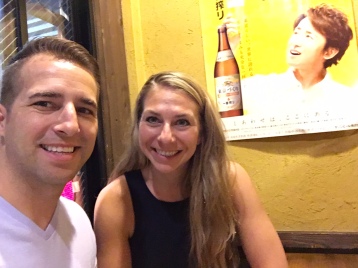 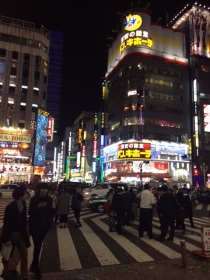 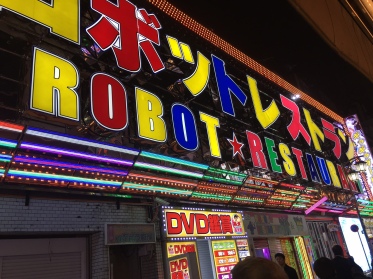 From here we just kept exploring the area trying to find something that would intrigue us.  On one side of the Shinjuklu is the Golden Gai, a neighborhood of small little bars, or izakayas. The izakayas have enough room to serve 10 people maximum, and the one that we went into, 5 Gallons, had about 6 chairs that were all full except for two. Izakayas typically charge a cover charge, and as part of the payment you receive a small appetizer or snack to enjoy along with your beverage. The appetizer being served for the evening was a “Japanese curry”, which tasted basically like someone chopped up some hot dogs and let them sit in a thick broth for hours. Scot thought it was putrid, but Sarah kind of enjoyed it.

We sat next to two Japanese businessmen who spoke virtually no English but that didn’t stop them from trying. After 20 minutes of trying, the guy next to Sarah finally spit out, “Trump- crazy!” and the entire bar exploded into laughter. When we finished our sake and beer we wandered around the izakayas for a few more minutes, then headed back to the hotel to get some rest. 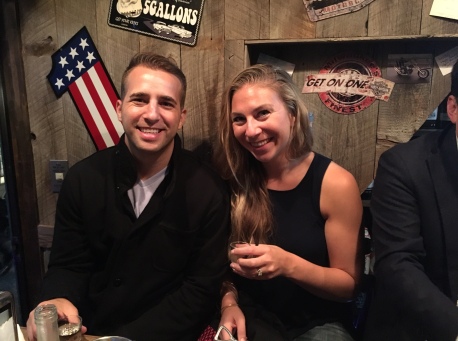 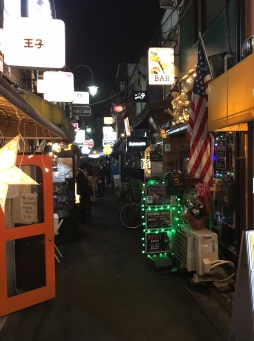 The next morning we woke up early and got a workout in. The gym of the hotel overlooks the river, and in our purview we could see the replica Statue of Liberty as we worked out. After our workout we hopped on the train (which was super easy to navigate) and ventured out to the Tsukiji fish market to meet Ruby for lunch. We wandered around the crowded fish market, observing the giant fillets of fish and settled on a restaurant that was advertising a bunch of different meals with fatty tuna (our favourite). Over beers and green tea, we shared a mixed bowl of fresh sushi rice and nigiri pieces- it was the freshest fish we’ve ever tasted in our lives- for less than $15 USD. 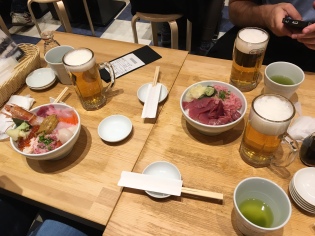 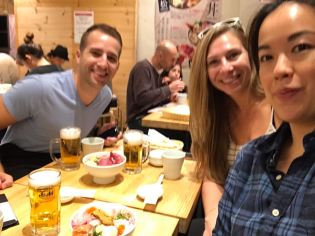 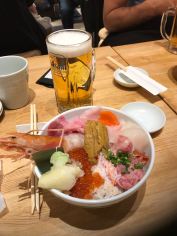 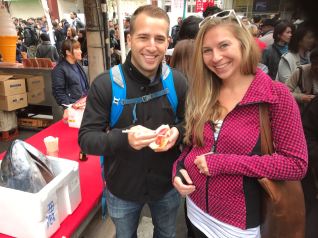 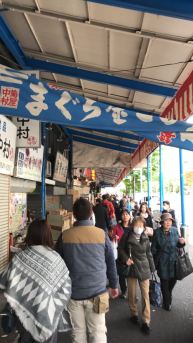 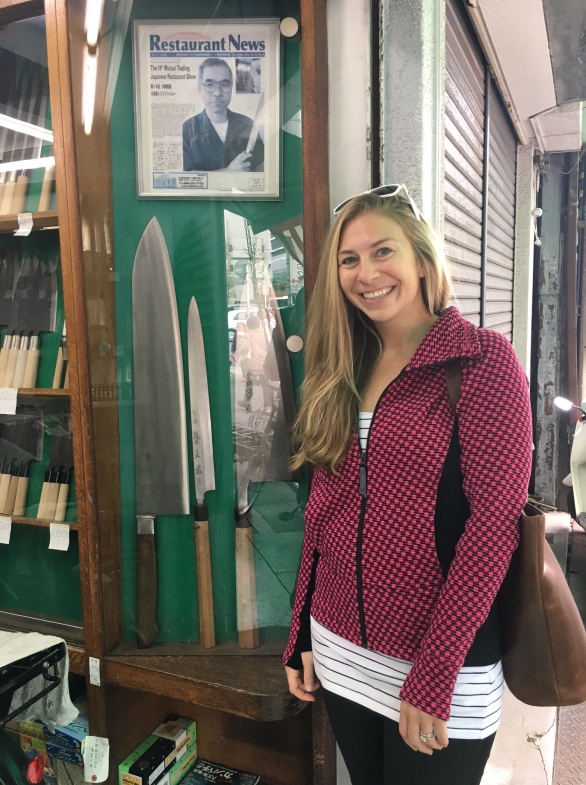 After lunch we walked to a knife shop where Sarah and Scot purchased a stainless steel knife as a Christmas present for Sarah’s dad. The store had at least 1,000 knives on display, one of which was nearly as tall as us. Once the knife was sharpened and secured in packaging we headed back to the hotel to pack up and head to the airport. We flew out of Narita which was about an hour and a half drive from our hotel (and $200+ USD cab fare- yikes), but got there early enough to enjoy some drinks in the American lounge before settling in for the 11 hour flight home.

Overall, Tokyo was an incredible city. We weren’t especially excited to go to Japan relative to all the other places in Asia that we have wanted to visit, but after having experienced Tokyo for 18 hours, we would definitely go back (or explore some of the other cities that we haven’t made it to yet).  We were also excited to get home and see our friends and family!