In Mid-September we were lucky enough to have another 3 day Holiday weekend thanks to Mid-Autumn Festival which meant a chance to check out another SE Asian city.  On this trip we elected to check out Hoi An, Vietnam.  We had heard great things from others about the town as its designated a Unesco Heritage site but were also told its a great place to get suits, clothes and other leather goods made as well.  We also had a $1,000 HKD (~$125 USD) gift certificate to a travel agent Scot won at the Holiday Christmas party so were able to use that to offset the increased costs of the Holiday airfare.

We took off Thursday evening after work and landed in DaNang (to get to Hoi An you actually fly into the city of DaNang and then drive about 30 minutes south) around 7:30 PM were the Holiday got off to a real rocky start.  When you arrive in Vietnam you can get what is known as a “Visa on Demand” which requires you to apply a few weeks in advance for a visa then get a letter that allows you to enter the country.  Upon arrival you present the letter and pay $25 USD for a single entry/exit visa.  We followed all the proper protocol at the end of August for this trip, however on September 1st, the US and Vietnam government signed a new agreement that changed the process such that US citizens could only get 1 year multiple entry visa at the cost of $135 a person.  So when we arrived, the customs agent in broken english tried to explain this to us but wasn’t doing a very good job, for about 5 minutes we thought we were going to get denied entry.  When we finally figured out what he was saying to us, we realized we only had to pay the extra fee (but we didnt have an extra $220 USD, so that created a new complexity).  Eventually a customs agent escorted Scot outside of the terminal to an ATM to get an equivalent amount in Vietnam Dong so we could pay and enter the country.  Not the best start to the vacation given the whole process took over an hour but things only went up for there and now we can go back to Vietnam anytime in the next year without having to worry about this.

Once we left the airport we found our driver and head towards our hotel, the Hoi An Silk Marina Resort and Spa, which we selected for its proximity to the Hoi An downtown and its big pool.  After we checked in and dropped off our luggage we were quite hungry so headed towards town to grab a late bite.  We had a pretty delicious Vietnamese meal at Green Heaven Resort just outside of the actual downtown of Hoi An. We were traveling during Mid-Autumn festival and the night we arrived was the biggest night of the holiday, so while we were eating we could see and hear hundreds of Vietnamese locals celebrating at a children’s concert in a nearby park.  After dinner we walked down the promenade for a bit, then decided on a foot massage before heading to bed.  As is often the case in SE Asian countries, there were 3 different massage parlors right across the street from the hotel, so we went with the one that had no wait but of course was also cheap (around $6 USD per person for an hour). 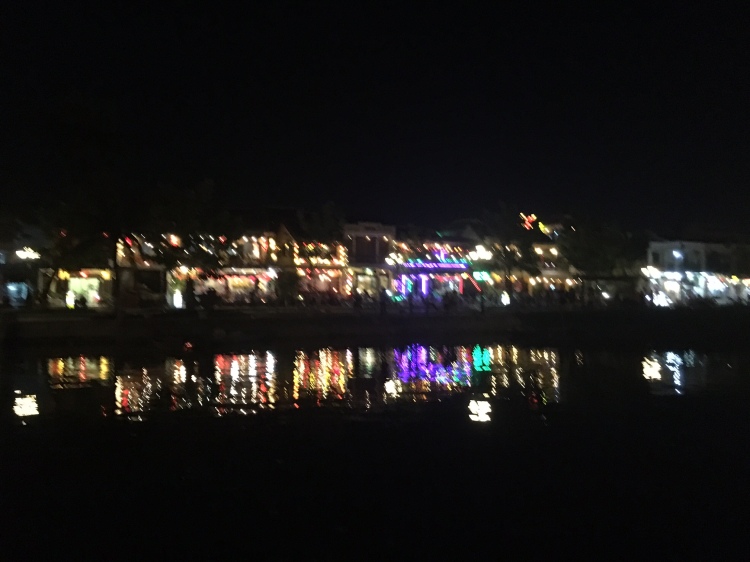 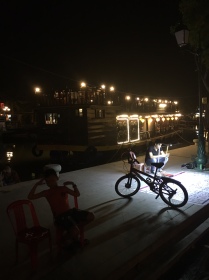 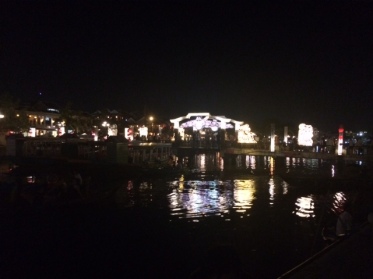 The next day we visited the Historic Downtown district, which is the main attraction of Hoi An. Hoi An was an ancient trading port dating back to the 15th century, and the downdown area is preserved almost as it was when it stopped being used as a port in the 19th century. The Historic district is unique because its buildings and landmarks are reminiscent of not just Vietnamese tradition, but they also bear distinct international influence from the numerious different foreigners who once used the town as a port (Japanese, French, Russian, etc.). In fact, the most famous landmark in Hoi An is the Japanese Bridge, which we visited as our first stop in town. After the bridge we stopped in at a few different tailor shops to compare prices and quality before we decided on who would make our clothes. We bought our first pairs of sunglasses from a street vendor, then stopped for a drink at Bazaar Hoi An, which is a small restaurant on one of the main roads with a beautiful garden in the back and a great view for people watching in front. 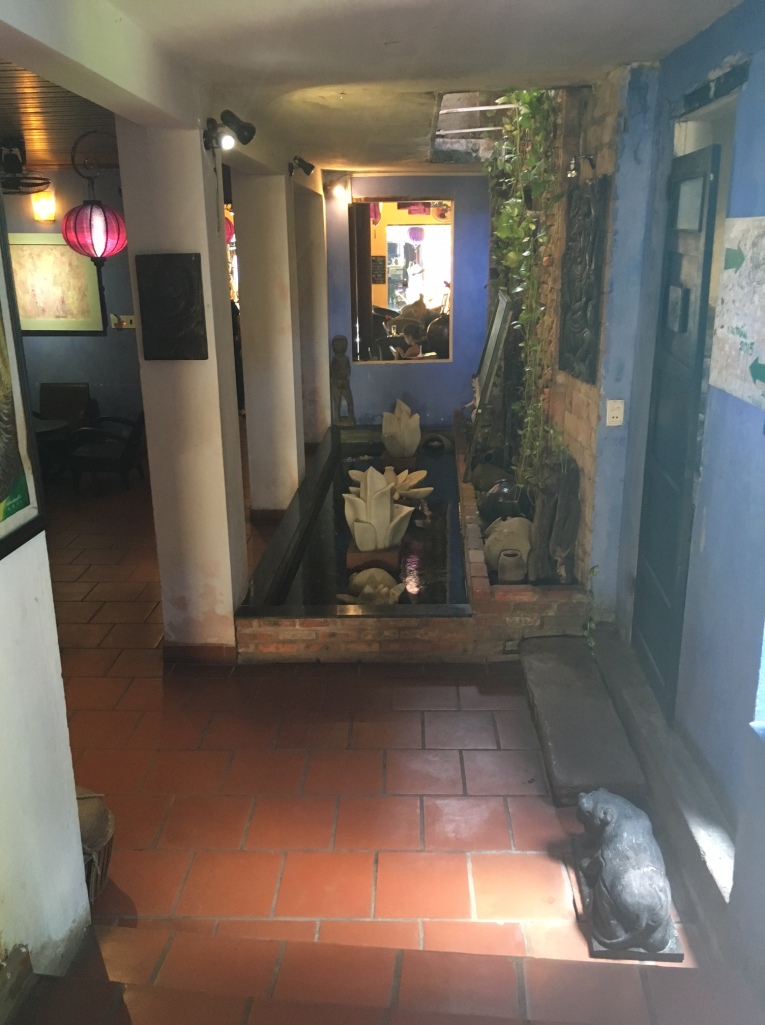 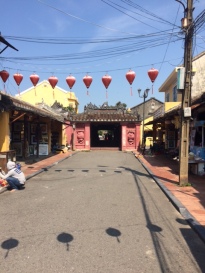 After lunch we had each decided on our respective shops: Scot chose Aobaba and Sarah chose Duong Dong. We each picked our favorite fabrics and styles, then spent an hour getting fitted for our various items (Scot’s took about twice as long…). Sarah ordered 5 dresses and three blazers, for a total of $225 USD- not bad, but also not spectacular prices for women’s clothing. Scot, on the other hand, really cleaned up- he got 3 suits, 2 sport jackets, a winter coat, and three dress shirts for $650 USD. Not only was it a great price, but the quality was excellent and fit extremely well (we recommended the store to a friend who went last month, and would recommend it to anyone going to Hoi An in the future). On our way back to the hotel, we also stopped at a leather shop to check out bags and shoes. Sarah ordered an over-the-shoulder bag large enough to carry a laptop, and Scot ordered a new laptop bag- each cost $75 USD. Exhausted from shopping, we headed back to the hotel to relax by the pool. After a quick shower, we returned to the Bazaar Hoi An for dinner and called it an early night. 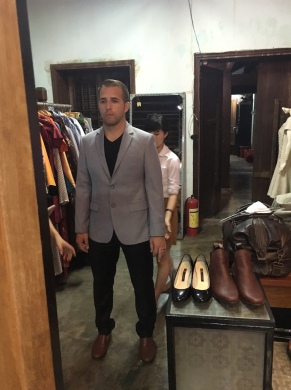 The following day we woke up, worked out, and laid around the pool until it was time to head back to town to try on our clothing. If you’re having clothes made, expect that you will need to return to the shop for at least one, maybe two fittings before you leave- it’s worth it, to make sure the clothes fit you properly! We picked up our new bags after our fitting, then went to the White Marble Restaurant for wine and people watching. While drinking our wine, we saw our sunglass vendor friend from the previous day and (perhaps feeling loose from the wine) we bought two additional pairs of sunglasses each, for ~$2 USD a pair. We picked up our bags, headed back to the hotel and relaxed by the pool for a bit. After sundown we had some cocktails and played cards on our balcony until dinner time. We headed back to the White Marble Restaurant for dinner because they had been advertising a multi-course dinner special during the day which looked delicious. It WAS a delicious and very unique take on Vietnamese food- both of our favourite dishes was a vietnamese seasoned peppery flank steak that was extremely tender and flavourful. On the way home from dinner we stopped back in the same store that made our bags, and Scot ordered a pair of shoes to be picked up the next day.

On Sunday we were departing back to Hong Kong, but still had some clothes and shoes to pick up, so we headed back into town and collected our remaining items. Side note: Duong Dong forgot to pack one of Sarah’s dresses in the bag and we left without it- after several emails (and one threat to cancel the credit card charge), they shipped the missing dress to Hong Kong with apologies. We ate a quick lunch by the pool then headed to the airport for our flight. After an amazing 2.5 days, we couldn’t have escaped the airport without trouble. Our flight (which was the only flight going back to HK that evening) was delayed and nearly cancelled due to plane issues. Finally we took off ~3.5 hours late (which was better than never)! Monday was rough, but we had such a great time in Hoi An that we would probably risk enduring the terrible airport experiences again to go back. We would definitely recommend a stop in Hoi An if you’re traveling through SE Asia (but if you’re tight on time and don’t have much wiggle room in your travel plans, you might want to skip it).